On 3rd October, Swedish fashion retailer H&M reported that strong summers sales helped to deliver a 25% increase in their third quarter profits sending the shares up more than 20% in the prior 3 months rolling as investors took well to the upbeat set of results that confirmed their turnaround was on track.

H&M profits increased by 25% during the third quarter going from SKr4.01 to SKr5.01, reflecting strong strides in recovery. H&M saw increased competition when Zara took over its place as the world's largest retailer and other online cheaper retailers lured away customers. Financial Times credits the companies success in the third quarter to new strategies to reduce discounting and inventory levels, and increase its online presence. According to store managers that Woozle spoke with also credited their success to collaborations with TV and Movie programs and their Club H&M App. The company displayed tremendous growth and net sales increased 12% with the help of online sales increasing by 30%. 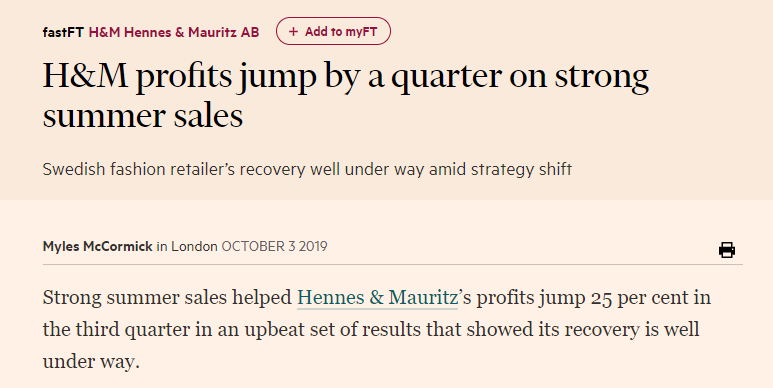 Ahead of results, Woozle's primary research team reported strong results in Q3 and early Q4 trading with nearly all our interviews and surveys guiding for accelerating and positive LFL sales trends; beating targets. Our Long/Buy recommendation on H&M reported on continued strong LFL sales growth for H&M stores across both the US and EU. For the start of Q4-19 we saw strong fundamental trends from H&M stores with 100% of the October sample reporting higher LFL sales. Over the 90 day reporting period, we continued to see strong fundamental trends for H&M with managers reporting better fundamental trends both QOQ and YOY. Our insights suggested LSD LFL sales growth for H&M stores globally, with EU stores reporting LFLs sales growth around 2-3% with US stores reporting slightly higher results around 3-4% YOY. EU stores reported improvements from a focus on customer service which has boosted ATV trends along with improved footfall conversion rates. US managers reported to us that they have seen better LFL sales with a number of stores reporting to us recent store refurbishments which have boosted footfall. Managers have also reported a new division scheme in stores into color themes which have significantly boost UPTs from “back-to-school” customers. Managers continued to report improved inventory positions for stores.

Woozle's Long/Buy idea on H&M generated more than 20% Investment returns for clients in the 3 months period leading up to third quarter earnings. 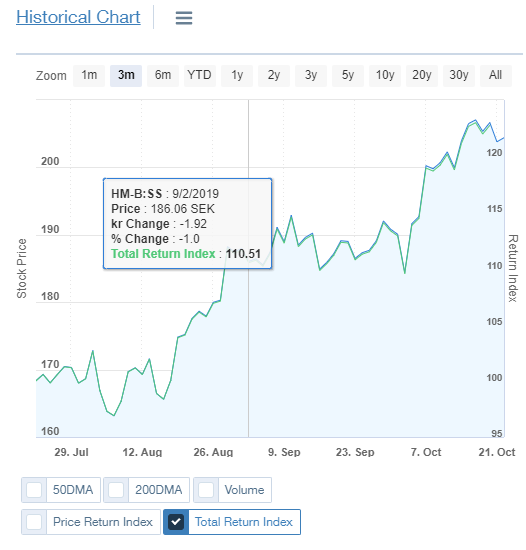 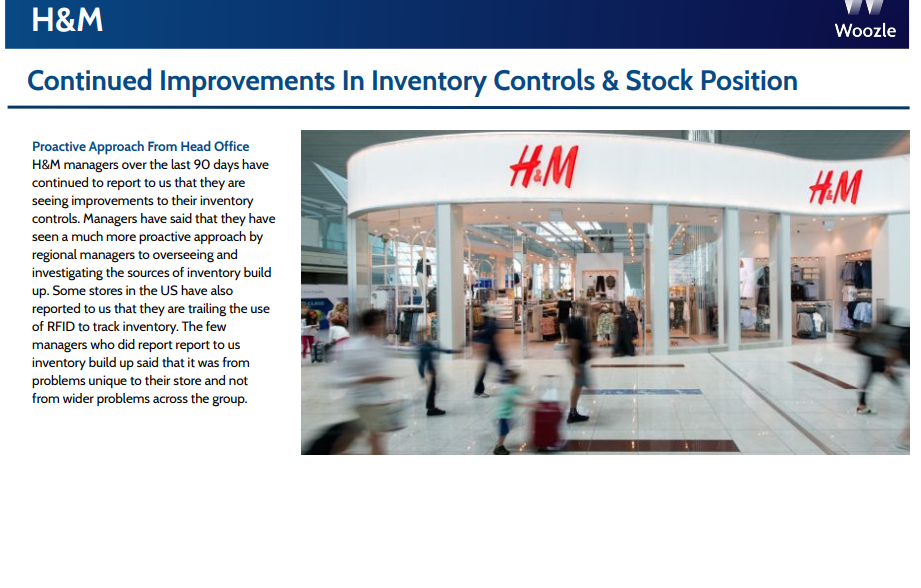